I was overjoyed to be interviewed about my love of classic movies on Music with Minnesotans on MPR!  I love all classic movies but musicals especially.  I chose An American in Paris, Power Of One, Singing in the Rain and West Side Story.  All great!

Today the nominations for the 2015 Tony Awards were announced.  Any one who knows me knows I am a huge musical theatre fan.  Especially MGM musicals like An American in Paris and Singing in the Rain. In fact, tonight I am on MPR’s Music with Minnesotans!

So it was appropriate that the nominations came out today and An American in Paris received a Best Musical nomination.

Also nominated were Fun Home, Something Rotten! and The Visit.

Other nominations of note included, Bradley Cooper in The Elephant Man, Helen Mirren in The Audience, Ruth Wilson in Constellations, and Kristin Chenoweth in On the Twentieth Century.

Five Shows to Watch This Weekend

The weekend is coming up and here are five shows that are capturing the public’s attention.

1. The Bruce Jenner Interview with Diane Sawyer:  Good or bad this interview with garner a lot of ratings.  It’s intriguing and at the same time sad.  Friday at 9 CST ABC.

2. It’s Elevation Weekend on Discovery Channel. There will be a lot of mountain climbing on the channel this weekend.

3. The 42nd Annual Daytime Emmys are Sunday.  They are on Pop channel.  I have no clue what that is.  I remember when they were on during primetime on a major network.  Oh, how the mighty have fallen.

4. Wolf Hall: The fourth installment of this series about Thomas Cromwell airs on Sunday night on PBS.

5. Lastly, Mad Men is running down.  Another episode airs Sunday night on AMC

Every time I need a refresher in pitching, I read Ragan’s PR Daily on Zite.  I love their strategy to telling  a good story: simple and true.

This one caught my eye today.  It’s so true!  I’ll keep it in mind every time I pitch:

Here are those five pitches from the article.

4. Jargon-laced rundowns of campaigns and newsjacking

1. I agree with the article that using Twitter is a big help. I just did this last week with a reporter in South Dakota.

2. Less is more.  Don’t saturate the market.  Get one outlet to write an extensive article.

3. If you are going to have a release, make it an action-oriented release.  For example, have a verb in your headline v. a title.

4. Figure out who is in charge of a certain show.  Don’t pitch an anchor.

I’m so excited.  Tomorrow I’m taping a segment of Music with Minnesotans on Classical MPR.

I’m going to chat about PR as well as movie scores.  As some of you know, I love classic movies and I’ll be mentioning my favorites.

To listen in go to: http://www.classicalmpr.org/topic/music-with-minnesotans

Also, a client was just chosen as a contributor for Talk International.  Them help international students adjust to life in the U.S.

That’s all for now!

Have a great weekend!

Tax day tomorrow.  Be warned!  There are several scammers out there.  They will call you and say the IRS is suing you or you own x amount of dollars.

Rule number one: The IRS will never call you.  They will always send letters first and then have a person come to you.  These scammers are serious and they will not give up.  They have recorded messages they leave on your voice mail and will pray on our insecurities.  They ever have a Washington, D.C. number but I feel the foreign accent gives them away.  I was called and the person was very hard to understand and they founded very far away.

So… on to something more interesting.

I read today that there are now Twitter awards.  Movies have Oscars, TV the Emmys.  Now we have the Shorty Awards.

Here is a reel about them: http://shortyawards.com/about

The awards has existed for 7 years and they have categories such as: Best Pinner, Best Fake Account, Best Weird Piece of News.

Readers Cannot Judge a Book By the Cover At this Bookstore

I can across a posting on Twitter yesterday and fell in love with a concept.  As a writer and book publicist, I’ve heard not to judge a book by the cover many times. Now, Elizabeth’s Bookshop in Newton, Australia has a section called Blind Date with A Book.

The concept is simple.  Employees wrap staff-selected books in a brown wrapper and write a brief description of the book on the front.

Then readers must choose which one to read. Readers have seven days to return the book if they have read it.

I’m not sure how much graphic designers would love this idea, but for writers it’s perfect.  Imagine being able to have anyone pick up your book without any sort of built-in prejudice! 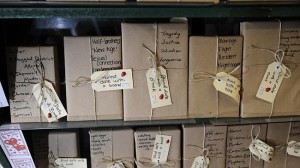 I continue to ask this question of myself?  Is news something that is dramatic, does it have to affect a large group of people, does it involved a famous person?  All of these questions get answered in many different ways.

I do think we are very obsessed with celebrity and the more outrageous the story, the bigger the story.  For example, the Bruce Jenner story is huge.  How does a man who won the Olympic decathlon, who has 10 children and three ex-wives, want to become a woman?  It is intriguing.  But is it news?

It also seems like there are so many stories that make news but they are not news.  Right now Kylie Jenner is very popular.  She is seemingly dating a 25-year-old man and acts very grown up.  However, no one seems to bring up the fact that she is only 17!  Think of yourself at 17.  What would you be posting on social media? Something controversial.  Like blackface?

When she posts something controversial the world seems to be outraged.  But let’s face facts.  She is a child who has no clue what she is doing.

We seem to be treating these kids who are on social media as adults.  They are basically children who are playing grown up.

So what is a great story?

Here are a few:

CBS Sunday Morning did an excellent story about two boys who were obsessed with World War II and met one of their heroes: a veteran.  It was wonderful. http://www.cbsnews.com/news/twin-boys-form-special-bond-with-world-war-ii-veteran/

On a more serious note.  60 Minutes did a wonderful story about Belfast, Ireland and the conflict between the Catholics and Protestants.  I had no idea their peace agreement was able to work because they are separate but equal.

The real news takes time and effort to research.

Let’s try our best to find the news and leave the kids to go to school.

In this fast-paced life of high-speed Internet, Skype, and cell phones, I’m never impressed or amazed. Well, this week I was as amazed as a child at their first circus side show.

Amazon has done it again.  They are premiering Amazon Dash.  With an Amazon Prime membership, we can push a single button with a brand logo, and an adhesive strip on it. By pressing this button, Amazon will automatically order items we need.

Think about it.. you are at the washer, you realize you are out of Tide.  Press Dash and it will be on your doorstep in a few days.  The best way to use it is to push it when you only have a few left. 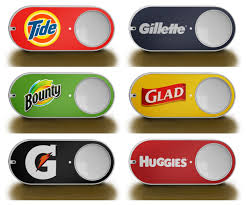