Amazon Prime announced today that it will air a new car show with the former Top Gear hosts.

It is being reported that Valerie Harper has been hospitalized after collapsing on stage in Maine.

Mission Impossible opens tomorrow and it is garnering great reviews!

Lastly, today is National Cheesecake Day! Go get a piece!

Today marked the passing of Bobbi Kristina Brown. She never had the chance to depart from her parents’ shadow. She will alwas be the daughter of Whitney and Bobby.  What would she have done with her life? Music? Acting?

I remember when she would come on stage with her mom.  If you listen closely you can hear her on Whitney’s song My Love is Your Love.  See link below.

Can you believe it? Sharknado 3 was on last night. I hear it is getting pretty good reviews.

There are so many stories out about sharks.  If you have kids and want them to get educated about sharks, check out the Tristan Hunt series by Dr. Ellen Prager.

The series is for  kids who are interested in sharks and other ocean life.

Have a great Thursday.

Welcome to the Dog-Days of Summer!  It’s hot, sticky and the kids are bored.

The summer of 2015 has been an exceptional time.  It has been characterize by two very different men:  Bruce “Caitlin” Jenner and Bill Cosby.  Think about this.

America has two sweethearts.  Bruce Jenner is an All-American sporting hero.  He saved the 1976 Olympics by winning the decathlon and becoming the face of Wheaties.  He was the ideal American male.  He had beautiful kids, a beautiful wife and was a person everyone looked up to in business, entertainment and sport.

We also had another hero.  Bill Cosby was everyone’s father.  The Cosby Show was a genius combination of hilarity, intellect and American values.  We looked to him to guide us.  But let’s step back… even before The Cosby Show Bill Cosby was a legend.  From I-Spy to his stand-up comedy, we all listened to Cosby.

I remember laying on my carpeted floor in front of the TV watching Bill Cosby Himself over and over.  We had all of the monologues memorized.

The men were at the very top of their chosen careers.

Now fast forward to Summer 2015.  In many ways we have lost them both.

Bruce Jenner was living a lie for years.  He wanted to be a woman.  However the man we thought we knew will forever be lost. However, Jenner had the courage to show his true self and is being celebrated.

Cosby’s secrets have come out and we see that it is true he had a spotless reputation but his character was flawed.

His former co-worker Joseph C. Phillips was on Sunday Morning yesterday and brought up some thought-provoking questions about Cosby.

Check it out here: http://www.cbsnews.com/news/joseph-c-phillips-on-bill-cosby-and-character/

It is inevitable that our heroes will fall.  We build them up to be perfect people but in reality we are the same.

We all make choices and make mistakes.  Some mistakes are unforgivable.

July 16th, 2015 | Posted by Sara in Uncategorized - (Comments Off on Emmy nominations)

Emmy nominations come out today.  According to USA Today here is what the main stories will be.

1. Will Empire get nominations?

2. Will Modern Family win a sixth Emmy for best comedy?

3. Will Jon Hamm win an Emmy after losing for years?

Today is a big day in the world of publishing.  Harper Lee releases her second book.  Her first was To Kill a Mockingbird which was released in 1960 and won the Pulitzer Prize.  The  book inspired millions of Americans and those around the world. Gregory Peck won the Oscar in 1963 for his portrayal of Atticus Finch.  So today is a huge day in the world of American history as well. To Kill a Mockingbird is required reading in every high school or college writing 101 classes.  However, today many are saying they will not read Go Set a Watchman as they assert Finch is portrayed as a racist.

I have not read the book but I’m sure Lee’s portrayal is much more well-rounded and in many ways I’m glad to see that Finch had more dimension than his saintly portrayal in To Kill a Mockingbird. It will be interesting to see how readers respond because rumors are Lee has a third book waiting in the wings.

The following are a few reviews of Go Set a Watchman.  Judge for yourself.

So many news stories, so little time

There have been so many interesting news stories this week and last.  I wanted to mention a few and give my two cents.

1. Bill Cosby. This story continues to fascinate and disappoint the country.  A man who was a legendary figure in entertainment falls farther than any entertainment figure has ever fallen.  No one was more powerful than Bill Cosby in the 70s, 80s and 90s in entertainment.  He has done it all!  Now, he looks toward a future with no work and a reputation that is in tatters.  The lesson is be honest.

2. Confederate flag: South Carolina voted to take down their confederate flag today. What about Alabama, Mississippi, North Carolina, etc?  It is a part of history but it seems weird to have waited this long.  Do we need to have a tragedy to make us have common sense?

3. Trump:  What can I say?  He is saying what many are thinking but he lacks the class, style and intellect to become president.  Next.

4. Now, in news that doesn’t matter:  Kourtney and Scott.  They broke up… for the moment.  My thoughts? Wow, Kourtney finally woke up to the truth.  Scott has been a thorn in her side for years.

5. Lastly, The Minions are out in the theaters! I’m there!

Back from the Fourth!

What a wonderful, relaxing holiday we had!

We wanted to get away from it all and we did!

David and I went to a tiny house in Wheaton, MN.  We found it on Vrbo.com and it was all we thought it would be.

We arrive to a small house trimmed in metal with red and blue paint.  Then we heard it..

A rooster named Rusty.  The owners have chickens!

Our weekend was about hiking, mosquito swatting, biking, reading and relaxing.

We even gathered fresh eggs and had to let the chickens out of the coop in the mornings!  That is one for our bucket list!

Here is a picture of Rusty! 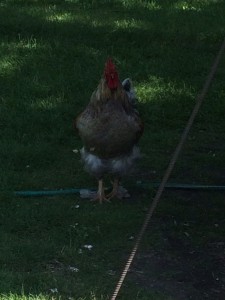