Good morning!
My thoughts and prayers are with the victims of the Boston Marathon bombing.
I’ll be posting a new blog on Thursday.
Thank you.
Sara’s Pop Op

According to Wikipedia, popular culture is the entirety of ideas, perspectives, attitudes, memes,[1] images, and other phenomena that are within the mainstream of a given culture, especially Western culture of the early to mid 20th century and the emerging global mainstream of the late 20th and early 21st century.

In short, pop culture is the study of popular ideas and culture.  It may be influenced by media, opinion, and even family and friends.  Our pop culture is constantly changing.  We swing from being bobbysoxers screaming at Sinatra because of a harmonious singing voice to being obsessed with the Kardashians for no reason.

Today I’m introducing “Sara’s Pop Op.”  My name is Sara Lien and I am the owner of Lien Public Relations.

I work with the media to tell stories.  I have a history in journalism and law.  However, since childhood I have loved film, books, celebrity, and media in general.  I confess.  I wake up in the morning, grab my iPhone and check TMZ and USA Today.   I enjoy stories about Halle Berry’s pregnancy and the latest movie reviews.

With my new blog I want to not just report these stories, but discuss these stories.   I am a journalist at heart and love to talk about people.  What makes them fascinating and why are we interested in some stories and not others.

For example, I want to talk about the latest baby bump but also why we are obsessed with pregnant celebrities.   I want to start a conversation about popular culture.

I plan to write two times per week about what is hot, what is not, and my opinions about those stories. I could be about beauty, fashion, media, film, books or even hidden great date ideas and restaurant reviews.

Feel free to write to me and tell me your stories, ideas, and why you think everyone is obsessed with Pop Culture. 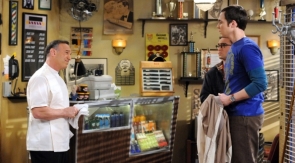 This is a recent episode of The Big Bang Theory starring Emmy-Winner Jim Parsons.  A LPR client was featured on the show’s set.  One can see the Rather-Be-Hunting Guy bobblehead in the barber scene on the cash register.

Listen: Everyone has a story to tell. Public Relations is all about telling great stories to inspire others. My job is to ask questions and find the aspects of your story that will help raise awareness and build your brand. We will ask you background questions to learn more about your story, objectives, and goals. Your first consultation will be without charge.

Promote: Once we review your story and product, we will develop press materials such as press releases, press kits, and  flyers to help tell your story. In addition, we will pitch your story in a creative manner to the media. What makes our promotion different is we look closely at the media outlet and change our pitches based on that target audience of the media. We will send your book to the media and follow up to those interested in the pitch.

Results: Lien Public Relations will provide a weekly highlight email to the client about objectives performed, results and comments from media, and upcoming plans. Results from past clients include national reviews, book tours with 20-30 book signings, TV and radio interviews reaching thousands of viewers, and endorsements from national personalities.